On April 10th it was just a regular day, Cayden was hanging out on our bed watching some cartoons while I was doing the dishes when I heard him crying pretty bad. Judging by the cry, I went running thinking he fell off the bed or something bad. When I got into the bedroom he told me he had orange skin up his nose, I looked up there as best I could and didn't see anything. He typically calls orange skins the little white strings that are always on the cuties tangerines so I thought if anything it already fell out or was just this thin tiny piece that would blow out. Well as the minutes went on I could tell it was aggravating him. He kept coughing and it wasn't long before his eyes mainly only one was watery and red along with that nostril. I still couldn't see anything so I decided maybe a bath would help (he was not a happy camper). It actually seemed to help for a while but again it was only a matter of time before the watery eye and nostril came back. By then a couple hours passed and I decided to get the flash light and try as best I could to look up there(he did not make it easy). I had finally found it!! I was sooo excited which quickly faded when I realized I no longer have nose suctions. Desperate to give him relief (he was miserable) I grabbed a baster out of the kitchen. It was suctioning but not the orange. I decided to try non sharp tweezers which I was able to get a hold of it but it just wouldn't budge. By then I was getting soo frustrated between Cayden not of course wanting me to put tweezers and a baster in his nose to just wanting to get this, not sure what, out!! I called Tammy in desperation and she was so sweet to bring a really good nose suction she had. She stayed with me and tried to help but sadly no luck. I knew I didn't have a choice but to take him to urgent care. His poor eye was starting to swell. Mike was at work so luckily my mom was able to leave work around 8pm to come pick us up and take us to urgent care. Luckily we didn't have to wait very long but sadly Cayden would NOT cooperate. And at this urgent care, they will not force the kids down in any way, not even with their hands. We spent about and hour or so there trying everything for Cayden to cooperate but he was way too stubborn and there was no way he was going to let them try and get it out. Luckily they didn't charge us since they were never able to do it and by then it was after 10 so Mike met us there and we knew it was off to the ER. Cayden was so exhausted from the crying and trauma he fell right to sleep so we decided to head home for a couple hours and let him sleep. So around midnight we got him into the car and went off to ER. Mike and I were both exhausted, Mike had just worked a long 14 hour day and I was emotionally and physically a mess. We ended up sitting in the waiting room for around 4 hours! Luckily Cayden slept the entire time on Mike and I (we would switch off) and were finally called in. We thought that was the end of waiting but no, we ended up having to wait another hour and a half in the actual room for the Doctor to come in. Luckily there was the bed so we let him sleep on there. By then it was around 5am and the Doctor finally came in. Poor Cayden was woken up to a stranger trying everything to get it out. He tried a suction, and tweezers, and nothing!! He decided to get this crazy tool that is a little tube with a tiny balloon on the tip so he put it back behind the orange and blew up the balloon, pulled it out and wa la!! 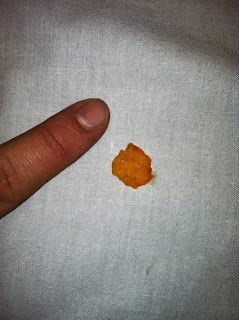 I could not believe how big it was! That is Mike's finger. I was soooo relieved!! I have no idea why in the world he did it, he is not like that at all, and for how big it was compared to his nostril he really had to of worked hard to get that up there. Poor Mike and I left with Cayden around 6 and thank goodness Cayden went back to bed in the car ride home so we instantly plopped on our beds and got a couple hours of sleep. I am now able to laugh at the whole situation but I never thought I would have to spend $50 on an orange peel!
Oh and I had to mention, I took a couple pictures on my phone of the whole experience, luckily this one was on Mikes phone because mine have magically been deleted. All of my other pics are still on there so I have a feeling someone named Cayden tried to delete all evidence of this experience =)

Easter Sunday was a little crazy. Cayden had an episode during Nursery, he was playing with one of the other kids and was running and his head hit the door jam and they said right after he started to pass out. Luckily one of the moms there acted quick and got him to stay alert, he never fully passed out and never went pale. The other Leader ran to get me in Relief Society, nothing like a pregnant woman in high heels running to the Nursery room! Like all of the other times he was back to normal within a minute or so and wanted to run around and play, of course I was really cautious and stayed in the room. We unfortunately got stuff for his Easter basket way too late so we didn't get much and unfortunately never got to dye Easter eggs =(
Cayden is in love with peeps! His Auntie Julie introduced him to them and he can't get enough, luckily they are only around during the holidays =) 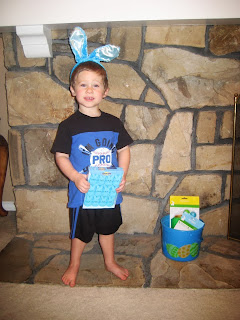 Cayden got some Candy and some fun little toys and Toy Story 3. He is on love with the first and second one so I assumed he would love number 3, and he does. He wants to watch it all the time! 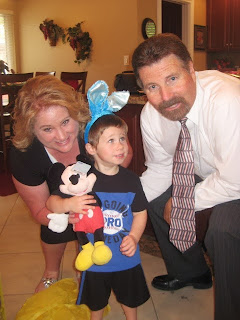 Grammy and Papa upgraded his Mickey! His other one is really small and from when he was a year old so it has seen better days but of course he still has both just big Mickey and little Mickey =)

Easter at the park!

The Saturday before Easter we walked over to the park for the annual Easter egg hunt!
Cayden was ready! 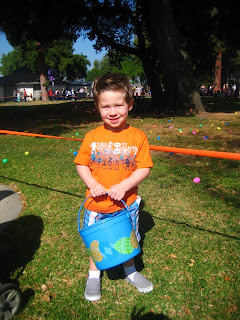 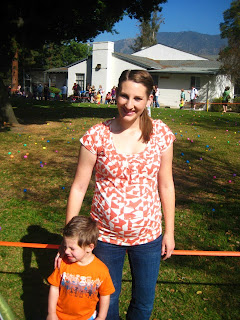 I went out with him to take the pictures while Daddy stayed and video taped. At first Cayden was acting all goofy and like he didn't know what to do but after about a minute he went into Easter egg hunting mode and was having a blast! I had fun capturing all of the excitement! 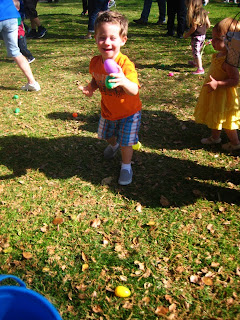 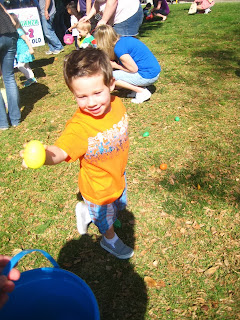 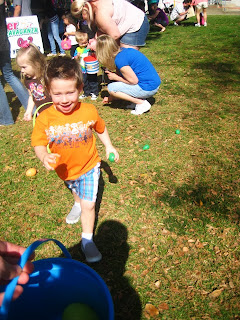 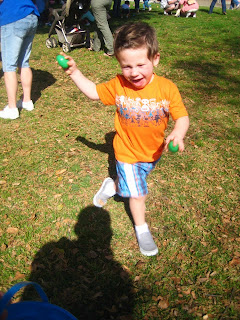 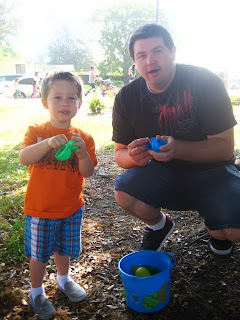 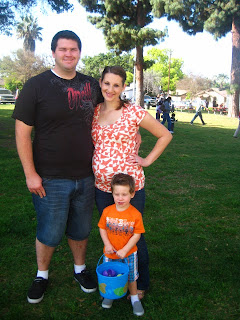 The Wednesday before Easter our workout group got together and had a little Easter party.
The kids did some crafts.. 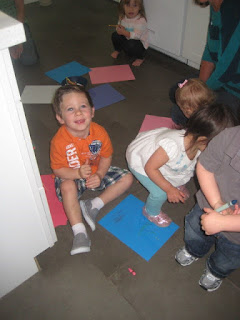 Group shot! Two of them unfortunately were not up for being in the picture.. 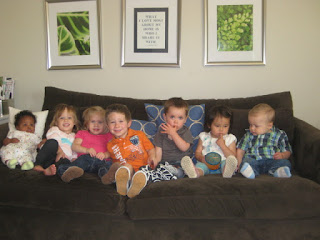 After we "hid" the eggs outside the kids went hunting! 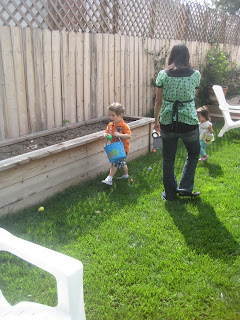 I was excited to see how Cayden was going to do with it this year and of course he caught right on and was having a blast finding the eggs.. 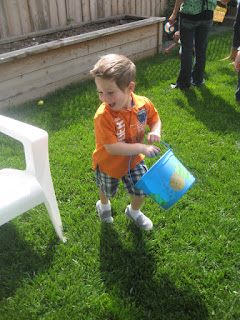 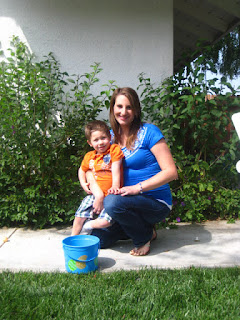 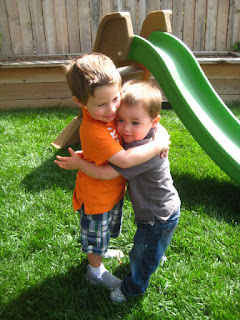 Well I hate to admit it but I don't really remember all that much about my Birthday ( I mean it was a whole two months ago and all). I do remember always forgetting it was coming and always having to think about how old I was turning =) On March 15th I turned 26 and was surprised in the morning with a beautiful bouquet of flowers from my mom.. 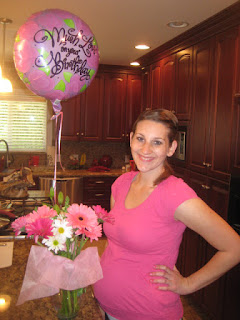 I do remember that Cayden gave me the best birthday present ever! He napped which NEVER happens, and it was a nice long one too! I had been wanting to go to Disneyland that day since we are hardly ever able to and the original plan was to leave Cayden with my mom and go with our friends Jared and Amanda but since Cayden napped I couldn't help but feel guilty if we went without him..
It ended up being freezing that night which worked to my advantage because I got a delicious warm clam chowder bowl which hit the spot.
I just couldn't resist.. 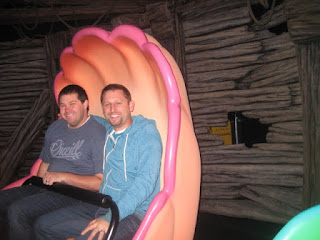 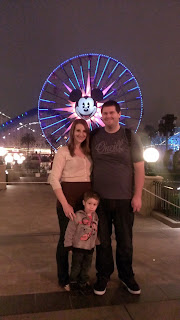