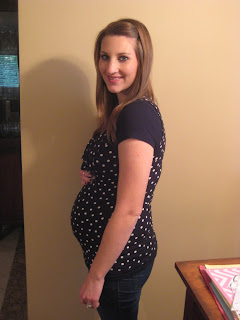 So I promise I wont try and complain this whole time but the fun pregnancy symptoms have sprung on, not that feeling nauseous 24/7 was in anyway =). The two main ones that stick out are the bloody noses and charlie horses. I don't get a dripping bloody nose every day, there is just blood in there every morning and during the day a lot. I will occasionally get a bloody nose as well. I had about a week to a week and a half of getting charlie horses in the middle of the night EVERY night. It was awful, the weirdest thing I did not get with Cayden was where they were. I still had the traditional back calf one, but the two worst ones were the side of my leg and even my shin getting cramped up. When those happened, not only was it nice and painful but trying to figure out how to bend my foot to make it all better was not an easy task. Luckily out of no where they went away but my poor calves were sore for a while. I have also had the cravings start and I don't like this either because the main thing is sweets! I am already a BIG sweet tooth but to crave it pretty much every day is not fun. I have been able to EASILY start packing on the pounds which I of course don't necessarily like seeing either but by 20 weeks I was still at only 6 pounds but that came on in a matter of 4 weeks. Other than all of that my pregnancy has been great! I love feeling our little one move around and was sooo anxious to find out the gender! 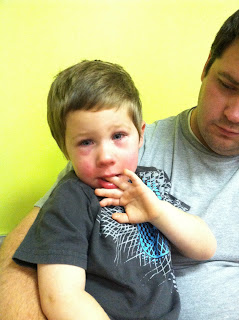 The day we went to the Children's hospital was a long, crazy day. We had to wake up super early because we had to be there around 7 which was not fun and they wanted Cayden to be tired so he would fall asleep during neurology(i did not think that was going to happen for sure). We thought Cardiology which was first would be a breeze and were really nervous about neurology. Well we were completely wrong. He screamed and cried about the whole time they were trying to do the ultra sound. He was a little scarred from the stickers they put all over your chest and stomach because a week earlier he had them with the EKG and they did not come off easily so taking them off was not fun. Besides the stress of trying to get him to stay calm, it was really interesting to see his little heart. Everyone was thinking it sounded like a heart problem so I was anxious to find out if they could see anything and sure enough everything was fine! Everything looked great! The cardiologist who we really liked thought it might be SVT. She in fact has it. It is not life threatening and surgeries can be done to fix it but she even said he may just grow out of it. She also suggested to make sure he gets food in his tummy every morning =). After a few hours there it was off to Neurology. Cayden did such a great job in there! 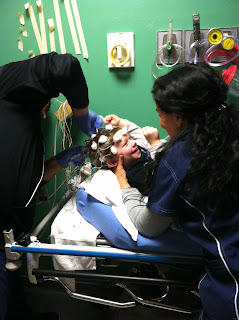 Luckily they don't do any type of sedatives there and Cayden loved the people that were helping him. I had to capture this picture. He was cracking up because he was helping the guy by handing him the cotton balls and was going a little too fast. He even fell asleep in my arms ( i loved that) which was shocking. They even gave him a remote control race car(which he has already broken) but it was so sweet. The next day we had the lovely task of driving BACK to LA to get the Neurology results and again, nothing! I still have my fears and some days its worse than others, but I was told to let him be his normal crazy, run around everywhere, self, and I have. Thank goodness we have not had any other episodes. I am just grateful he is healthy =)
Also his allergy results came back shortly after being done and we found out he has a slight allergy to shrimp, stronger allergy to molds, and oak trees which unfortunately are all around us where we live and a few other random things.

I am realizing I really need to be better about writing things onto my blog that I would love to look back on/remember so with that, we had a fun couple days the last week or so. The first incident, Cayden was down for his usual quiet time, I feel no need to say nap time since it sadly is never hardly the case anymore. While he was in there he was being really quiet, I was excited hoping that meant he was asleep until he started calling me. I went over to his door and instantly knew what he was into. It didn't need a pregnant woman's nose to smell the Vick's coming from his room. I quickly open the door to find him on his bed with Vick's all over, I mean caked on his face, hands, hair, and bedding. I couldn't help but laugh but then the worry set in. I immediately asked if he had put ANY in his mouth which he always replied with a quick no. Cayden had a little cough so I was putting baby Vick's on his chest before bed and accidentally left it out on his dresser the night before, bad idea!! The Vick's lingered for a while in his room and his hair mainly, even after the bath.

The other incident happened yesterday. Mike and I were frantically making breakfast for dinner (tradition on fast Sundays) and had just found out the missionary's would be over because whoever was going to feed them canceled. Cayden we thought was laying in our bed watching Polar Express (yes still a favorite) when he comes running into the kitchen saying he ate gum. This has happened before so I repeated what I thought he said, he agreed and then proceeded that he ate all of them. I had a pretty new pack of Extra in my church bag that was thrown in our room in the rush to pick up the house for the missionary's. I rushed into the bedroom to find 9 wrappers of gum! And let me point out Extra has the big size pieces not little trident pieces. I of course was a little panicked and did my usual google search to find worse cases, like a little kid eating 30 pieces. And luckily the only thing would be diareah or constipation. Luckily it was diareah once.
We cant leave this little guy alone anywhere =)

I turned 16 weeks on January 7th! By week 15 my all day nausea started to go away and was now just lingering at night. Eating a big dinner was not a good idea and I always had to have, pretzels, ritz crackers, or saltines by the bed. I was also starting to be able to stomach diet soda again so I would try and sip on that at night as well. This pregnancy has been so different, in the begining I was, well let's just say, a little crazy. My emotions were a little all over the place. Now its just emotional, I dont know if its the pregnancy or all of the stress we have been going through but I can shed a tear over just about anything. I am breaking out a little more than usual which of course I dont like. At 16 weeks I had still not put on any weight but figured it was due to the naseua. I can definately say I am showing a lot quicker with this little one.. 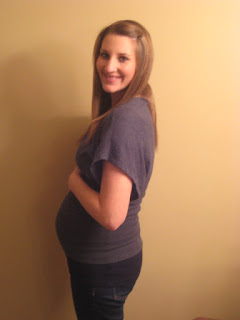